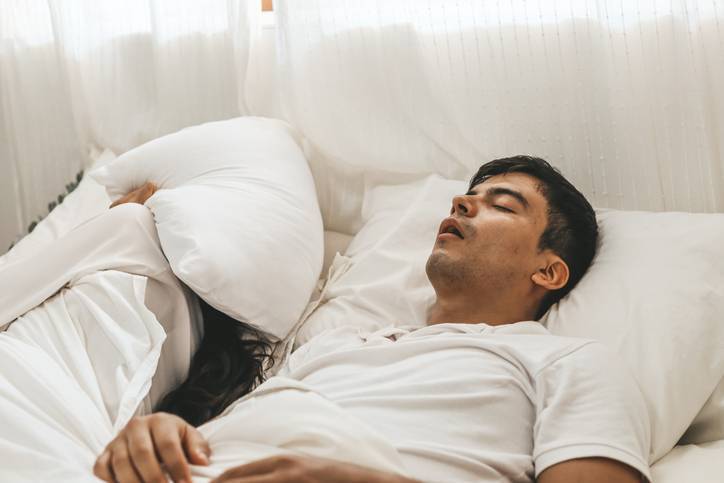 Ah, cupid’s arrow — finding love can be the best feeling in the world. The joys, the firsts, the snoring, the worst …

Wait, what was that about snoring?

If you feel slightly panicked reading these words, you’ve likely been in a relationship with someone who snores. And you know that nothing can put the damper on a relationship faster than sawing logs.

You’re snuggling up for a quiet evening in bed with your partner, drifting into sweet dreams, when all of a sudden you are treated to what sounds like Darth Vader choking through his mask. It’s going to be a long life (er, night).

Whether you’re the snorer or the one covering your ear, It’s easy to see how the frustrations of snoring could affect an otherwise beautiful relationship.

Honey, I Want a Sleep Divorce

Studies have shown that there is a direct link between the quality of sleep and the quality of the relationship, and that sleep issues and relationship issues tend to pop up simultaneously. This includes the huge sounds of snoring down to small issues like bedroom lighting and temperature preferences — if you and your partner are sleep incompatible, it tends to lead to conflict during your waking hours.

Further research has indicated that snoring couples are more likely to argue because they don’t get enough sleep. In fact, up to 90 percent of people who sleep beside a snorer have a hard time getting that good, deep REM sleep that is needed for rejuvenation. When you’re sleep deprived, you are more irritable and more apt to make mistakes.

And if you sleep less than seven hours a night? Research has proven that you’re more likely to bicker and fight than couples who get more shut-eye. These conflicts can then spill over into emotional and physical intimacy.

For instance, a survey in Australia revealed that 50 out of 300 women said snoring was the sole reason they divorced their partners.

This might be why many snoring couples are opting for something a little less severe: the “sleep divorce,” or sleeping in separate rooms so each party can get a good night’s sleep.

Although estimates vary, anywhere from 25 percent to 40 percent of couples have reported regularly sleeping in separate bedrooms because of their partner’s snoring.

Among those who have fully embraced the separate snoring bedroom are Hollywood heavyweights such as Tom Cruise.

When he was married to Katie Holmes, Cruise reportedly built a “snoratorium” out of a spare room that was completely soundproof when the door was closed.

Director Tim Burton’s snoring was apparently so bad that ex-wife Helena Bonham Carter slept in an adjoining home while they were still married.

Actors Uma Thurman and Ethan Hawke had to deal with the “elephant” in the room during their marriage, too. Thurman turned to self-hypnotism so she could fall into a deep sleep before Hawke, saying his snoring was “like sleeping with a herd of bellowing elephants.”

Athlete Shaquille O’Neal and actor Matt Damon have both sought treatment for snoring, with Damon saying he has tried hypnosis for the problem that bugged many of his ex-girlfriends, including actresses Winona Ryder and Minnie Driver, but didn’t actually bother him until it affected his own sleep.

Even the royals have fought over snoring. When brothers Prince William and Prince Harry lived together briefly, William said they would never live together again, complaining that Harry’s snoring kept him up all night. (Their father, Prince Charles, is said to have the same issue.)

But it’s not just famous men who are dealing with snoring, women can suffer from snoring too.

Judith Sheindlin of “Judge Judy” TV fame also built a snoring room at her estate in Connecticut, and it’s not necessarily for her husband. “I have been told I snore,” she said.

And comedian Amy Poehler has sought help for her lifelong snoring problem, saying, “I come from a family of snorers and we all used to record each other to show each other the damning evidence.”

If you noticed the theme with celebrity snoring couples and that many of them are now divorced, take heed. Snoring can definitely cause a rift in your otherwise healthy relationship.

Here’s what you can do about it.

If you’re sleeping with a snorer:

If you’re the snorer:

Finally, you can both choose to laugh about your snoring relationship. Snoring is not something that happens “on purpose,” and it doesn’t need to be a source of contention between you and your partner. Bring levity to your problems and work together to find a solution that keeps you happily coupled forever after.