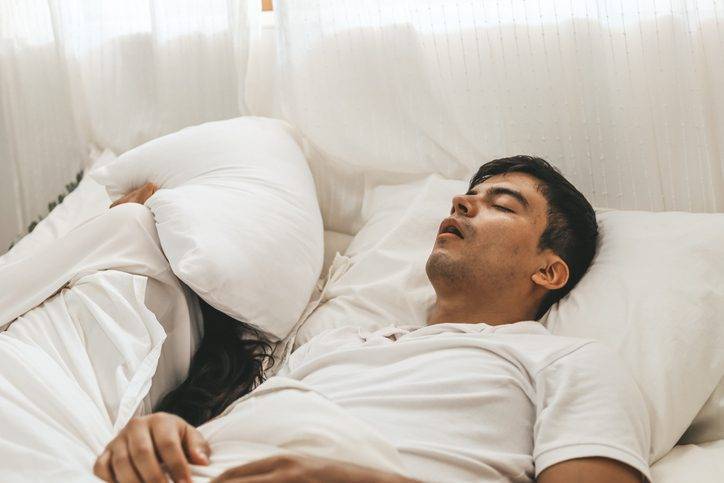 We spend a third of our lives sleeping — but many of us are in denial about how much rest we are actually getting and how detrimental this lack of sleep can be to our health.

For example, if you’re a chronic snorer, you could be suffering long-term effects without realizing it.

Here are some long-term consequences of chronic snoring and sleep apnea on your body.

Research has shown a direct correlation between the intensity of snoring and the risk of stroke.

Typically, sleep triggers homeostatic restoration that leads to a decrease in blood pressure (“dipping”). But when deep and frequent snoring deprives the brain of oxygen, your body elevates your blood pressure (“non-dipping”). Non-dipping is associated with poor cardiac, neurological and metabolic health.

The longer you snore each night, the more you risk developing carotid atherosclerosis, which is the narrowing of your neck arteries due to plaque buildup. Over time, the clogged arteries could lead to stroke.

The same artery thickening that could lead to strokes can also lead to heart disease. Data indicate that sleep apnea can double your risk of both nonfatal and fatal heart attacks.

Long-term snoring and sleep apnea are risk factors for developing an irregular heart rhythm, or arrhythmia. Atrial fibrillation is the most common arrhythmia, affecting about 6 million people in the United States. Half of these people have sleep apnea.

Research has also shown that the risk of having an abnormal heartbeat was 18 times higher immediately after an apnea episode compared with normal breathing.

This is because of the way sleep apnea makes your throat close while air moves in and out — causing a pressure change that can bring stomach contents back into your esophagus.

Additionally, you are more likely to have liver issues, including fatty liver disease and higher-than-normal levels of liver enzymes.

Although it sounds like a simple issue, injury due to sleep deprivation can easily be the most serious risk.

A driving analysis shows that the sleepier you feel, it’s more likely you’ll get into a car accident — especially if you’re driving alone.

Along with injury, lack of sleep can be a real downer on your mental health. Symptoms can start with frequent frustration to difficulty concentrating to serious depression.

In fact, a study of 74 snorers linked daytime sleepiness to depression and anxiety. Further research showed that people who snorted or stopped breathing several nights per week were three times more likely to have major depression than those who didn’t exhibit signs of sleep apnea.

If your head is throbbing most mornings, it could be because of your snoring.

Researchers have made connections between frequent wake-up headaches and sleep disorders. One such study found that people suffering chronic headaches — even migraines — are 2.5 times more likely to be snorers than those who didn’t report headaches.

In a study comparing 206 chronic daily headache sufferers with 507 people who have occasional headaches, the link to snoring was even more clear. The result was the same even when accounting for other breathing factors in sleep, such as weight and alcohol intake.

The headaches could be triggered by sleep apnea, during which oxygen levels drop and carbon dioxide levels rise repeatedly while sleeping. Carbon dioxide expands blood vessels to the brain, where pressure can lead to a frontal headache.

Waking up two or more times to urinate has been linked to snoring in both men and women, especially those 55 and older.

In fact, nocturia is a tell-tale sign of sleep apnea, in case you’re currently undiagnosed. Research confirms that more than 84 percent of patients with sleep apnea reported frequent nighttime urination.

Chronic snoring can affect your day-to-day so much that you lose desire to be intimate with your partner.

Studies have linked frequency and loudness of snoring to decreased sexual satisfaction, even when there’s nothing stopping sexual response. Additionally, sleep apnea has been linked to erectile dysfunction in men and could affect your ability to have children.

Because your body is deprived of oxygen during apnea events, you might notice it’s more difficult to catch your breath while exercising or doing activities you used to do without incident.

Did you know that the majority of patients with type 2 diabetes also have obstructive sleep apnea?

These two afflictions go hand in hand because the sleep fragmentation that occurs with sleep apnea can have adverse effects on glucose metabolism.

Therefore snorers and apnea sufferers are more likely to develop insulin resistance, metabolic syndrome, high blood sugar levels and a larger waist circumference — all of which can lead to diabetes.

Half of overweight people also have sleep apnea, typically because extra weight around the neck makes it more difficult to breathe at night.

But it can go both ways, and sleep apnea can lead to weight gain because of metabolic syndrome and high blood sugar levels.

As women reach menopause, they become more likely to develop sleep apnea because of hormonal changes that shift weight gain to the belly. Before menopause, the risk of sleep apnea for women is 1 in 200 and by age 65 it is 1 in 4.

How can you stop snoring?

The easiest way to avoid the long-term health effects of chronic snoring and sleep apnea is to discuss treatment with an experienced otolaryngologist such as Dr. Marc Kayem.

Dr. Kayem has performed thousands of successful procedures, both surgical and noninvasive. He is proud to offer the most-up-to-date treatments, including:

Dr. Kayem will perform a thorough evaluation to determine the exact cause of your sleep apnea or snoring before suggesting a corrective procedure. Call to schedule an appointment either in person or virtual and receive a diagnosis.